Tackling and overcoming the crisis will require even more fundamental change than dismantling Big Oil.

This story was originally published by the Carbon Tax Center. It is reprinted here with permission.

Forty years ago, the only “screw-in” light bulbs were incandescent. Little-changed since their invention in the late 1800s, “Edison” bulbs were cheap, disposable and staggeringly inefficient. “Small electric heaters that give off a bit of light,” someone once described them. Coal guzzlers, given how much electric current they drew.

Around 25 years ago, compact fluorescent light bulbs entered the market. offering the same illumination as incandescents for far less power. They quickly paid off their higher initial costs with saved electricity. But they took too much time to reach full brightness, their light was unattractive, and the bulbs contained mercury. CFLs were a climate solution, but far from an ideal one. 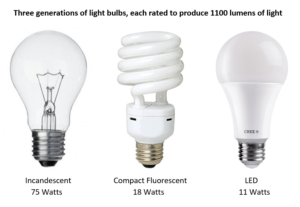 Sacrifice? Maybe, with CFLs. No way with LEDs.

Finally, a decade or so ago, LED bulbs became available. More efficient than CFLs, non-toxic, long-lasting and beaming brilliant light through dozens of tiny light-emitting diodes, LEDs are about as perfect a means of artificial illumination as can be imagined.  Consumers ate them up.

The widespread switch from incandescents to CFLs and then to LEDs is a big reason that, starting in 2005 and lasting for more than a decade, the U.S. economy held total electricity consumption constant — even as output of goods and services grew 20 to 25 percent. So unprecedented was this “decoupling” of electricity from economic activity that we at Carbon Tax Center produced a report, The Good News, celebrating it and explaining it. (Electricity usage did jump nearly 4 percent last year — Trumpism in action, perhaps? — but has dropped 2 percent this year.)

To be sure, more-efficient light bulbs weren’t the only factor holding down power demand. Digital tech in manufacturing and energy management also helped, as did the emergence of a robust business sector to harness energy efficiency. Ditto the structural shift from heavy manufacturing to service industries, along with a shift to urban living and delayed family formation, which resulted in smaller dwellings with fewer appliances (with the appliances themselves gaining in efficiency).

Nevertheless, the revolution in lighting offers the perfect rebuttal to the notion that energy efficiency — the linchpin of quickly eliminating fossil fuels from our energy supply — somehow entails sacrifice. LEDs produce the same or better lighting with more than an 80 percent saving in electricity. And if they cost more to buy, many utilities offer programs to help cut the customer price.

Which makes Elizabeth Warren’s handling of the light-bulb question during the a CNN “town hall” this week so frustrating. The question offered a fabulous opportunity to push back against the notion that energy efficiency means sacrifice. Alas, she missed the opportunity, as can be seen in this edited version of her exchange with moderator Chris Cuomo:

Cuomo: Do you think the government should be in the business of telling people what kind of light bulb they should buy?

Warren: Oh, come on, give me a break. This is exactly what the fossil-fuel industry hopes we’re all talking about. That [climate] is “your” problem. They want to stir up a lot of controversy around light bulbs, around your straws and around your cheeseburgers when 70 percent of the pollution and of the carbon we’re throwing into the air comes from three industries. Why don’t we focus there? It’s corruption. It’s these giant corporations that [are] making big bucks off polluting our earth.

To be fair, Warren took pains to say that “there are a lot of ways … to change our energy consumption. And our pollution. And God bless all of those ways.”But her attempt to deflect Cuomo’s question backfired, because she let his implicit equation of efficiency with deprivation go unchallenged.

Moreover, Warren’s “70 percent of the pollution comes from three industries” notion is grossly misleading. Yes, electric-power plants spew carbon, not the person at home, but cutting demand so those plants slow and stop their emissions during the transition to solar panels and wind turbines will require a redoubling of our home-efficiency efforts. (Emulating California would be a great start.) Which means ratcheting up efficiency standards for lighting, appliances and industry.

If we can’t proudly defend not just lighting efficiency but the 40-year collaboration of engineers, environmentalists and regulators that painlessly delivered efficiency to the appliance sector (refrigerators, air-conditioners, dishwashers, heat pumps, etc.), how are climate hawks going to champion the necessary choices that might entail some sacrifice, such as flying less, driving less mindlessly, welcoming urban density and transit-oriented development, and so on?

That’s why Warren’s punt on the light-bulb question hurts. And the harm has been exacerbated by the enthusiastic reaction of prominent left-green commentators. Rebecca Leber at Mother Jones congratulated Warren for “cutting through the dumbest climate argument,” despite the fact that Warren didn’t cut through the argument, she ducked it. At Vox, Li Zhou wrote that “Warren’s response speaks to how the fossil fuel industry [is] eager to shift the framing of subjects like light bulbs and paper straws in order to put the focus on consumer choice and deflect from the larger issue of reducing pollution,” a take that disconnects the vital matter of electric-generation pollution from the demand that helps give rise to it.

Sure, it’s politically attractive to put the onus for climate catastrophe on giant corporations. But actually tackling and overcoming the climate crisis will require even more fundamental change than dismantling Big Oil.

According to a more-than-a-little-snarky post on Curbed, the first of Lower Broadway’s hotly anticipated bus bulbs has been constructed on Broadway south of Spring Street. As Streetsblog wrote when the DOT announced the plan to construct the bulbs back in March, this is a noteworthy development for several reasons: The benefits of bus bulbs include […]
Nope, that’s not Lower Manhattan. It’s an example of a "bus bulb" in Edgewater, Chicago, a neighborhood known for its thoughtful planning and pedestrian-friendly streets. Tomorrow, the Department of Transportation will make the first public announcement of its Lower Manhattan Transit Priority Plan. We don’t have all of the details but the redesign plan for […]
If the melting of Greenland can’t make the American people pay attention to global warming, can anything? Environmentalist Bill McKibben, whose The End of Nature was one of the first books to raise the alarm on climate change for a general audience in 1989, is hoping that "Step It Up 2007," a day of rallies […]
A story about the new bus bulbs on Lower Broadway in the New York Times highlights the role that enforcement will have to play if DOT’s plan to make the boulevard more bus-friendly is to work. (Bus Rapid Transit, of course, will face similar issues when it rolls out later this year.) The story points […]
Since 2010, rapid bus service has been running on Manhattan’s First and Second Avenues. By nearly all accounts, it’s been a success. Bus speeds are up 15 percent. Faster trips mean that the M15 has defied the trend of sinking ridership on Manhattan buses, adding 4,000 more passengers per day. But the bus could be […]
With drainage grates being installed, Broadway’s bus bulbs can lose their fences. All images: Clarence Eckerson. Bus bulbs are one of the most versatile tools in the livable streets toolkit. By extending the sidewalk out into the street, you can send a calming signal to through traffic, spare buses the trouble of pulling to the […]