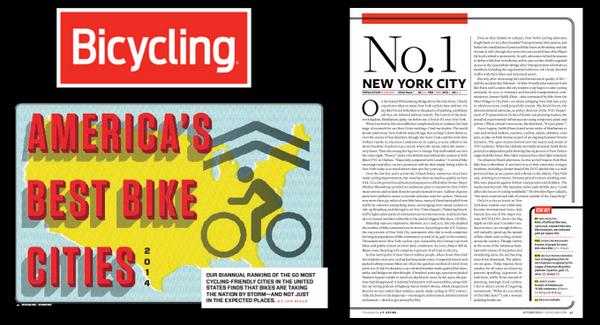 Later this morning, DOT Commissioner Polly Trottenberg will join the editor and publisher of Bicycling to announce that New York now tops the magazine’s list of America’s best cities for biking. The news leaked in Portland, which owned the top spot for years and where the stagnation of city cycling rates is a major story, as early as last week, so I figured I would share my thoughts on this development ahead of the official decree.

Here they are in old-school blogger bullet point format (didn’t have time to turn this into a proper listicle):

Tomorrow evening, city agencies and elected officials host a forum on improving bicycling in Bushwick. Then on Thursday, the City Council transportation committee will hold an oversight hearing on bike policy. Shouldn’t be that hard to make this one a big improvement over the last City Council hearing about bikes. As always, check the calendar for the full […]
It looks like the de Blasio administration has quietly tamped down its promises for increasing how much people bike in New York City. During the 2013 race for mayor, candidate Bill de Blasio issued a policy book that included a goal of 6 percent bicycle mode share for all trips citywide by 2020. That’s a lofty goal, and a difficult […]
With New York City’s population swelling to a record size, subways and bikes now account for about 700,000 more trips each day than 16 years ago, according to a new report from NYC DOT [PDF]. Car trips into the Manhattan core, meanwhile, are declining, but so is citywide bus ridership. DOT’s “New York City Mobility Report” follows in the footsteps of the […]
On the sidewalk of Lafayette Street this morning, next to the city’s newest protected bike lane and across from a Citi Bike station, officials and advocates celebrated New York’s #1 ranking on Bicycling Magazine’s list of the best American cities for biking. As Transportation Commissioner Polly Trottenberg accepted the honor, a question lingered: Given that […]
Bicycling in the New York City core continues to rise, according to the latest counts from the city. But the methodology NYC DOT uses to measure year-over-year changes in cycling is also showing its age. To get a clearer picture of citywide cycling activity, DOT will have to start doing annual counts in more places. […]
Did cycling in New York City continue to rise in 2014? We still don’t know, because NYC DOT has yet to release its annual count. Usually, by this time of year, NYC DOT has released its screenline bike count showing the year-over-year trend in cycling in the city core (specifically, the screenline count measures cyclists on the East […]