Parking it in the Slope

In the coming weeks I will be transitioning my blogging over to a new domain: Streetsblog. This new blog, supported by The Open Planning Project, will be covering the New York City Streets Renaissance Campaign on a daily basis. It will include other contributors as well. While the new site is in development, I will still be posting here at nap.com, so please stay tuned.

On Saturday, a group of Livable Streets advocates staged a "parking squat" in Park Slope, Brooklyn (see QuickTime video here). Organizers David Alquist, Jeff Prant and Geoff Zink showed up in front of the Connecticut Muffin shop on 7th Avenue and 1st Street at 9:00 am, dropped quarters in two parking meters, unfolded lawn chairs and proceeded to hang out, drink coffee, read the paper and chat with friends, neighbors and passersby in street space that would typically be occupied by two lifeless automobiles. 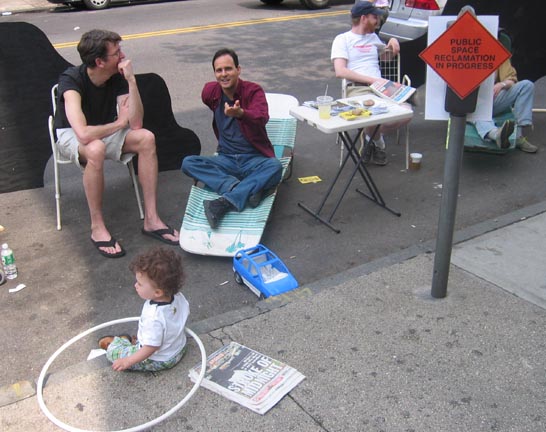 A parking squat challenges the idea that the vast majority of a crowded city’s street space–its public space–is best used for the storage and movement of private automobiles. Space is one of New York City’s most precious and valued commodities. The sidewalks of Park Slope’s shopping avenues are narrow and on nice weekends they are jam-packed. Yet, while pedestrians hauling strollers and shopping carts jostle up against one another on tiny strips of sidewalk, single-passenger vehicles frolic across vast swaths of asphalt. And while some people in this neighborhood pay as much as $2,500 per month to rent an apartment the size of a parking spot, renting an actual parking spot costs a mere 25 cents per hour. 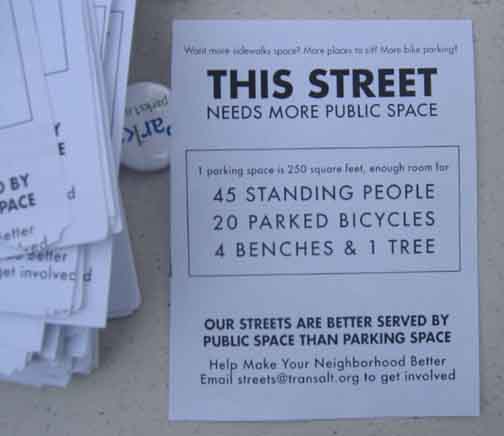 Centrally-located, catty-corner from the P.S. 321 flea market, and with generous outdoor seating, Connecticut Muffin already functions as a kind of neighborhood Town Square. On nice days like last Saturday the benches fill up fast and the line for coffee extends out onto the street. The demand for sitting space at this corner is high and as soon as the squatters put out their chairs, they were filled. People even came and sat on the curb. 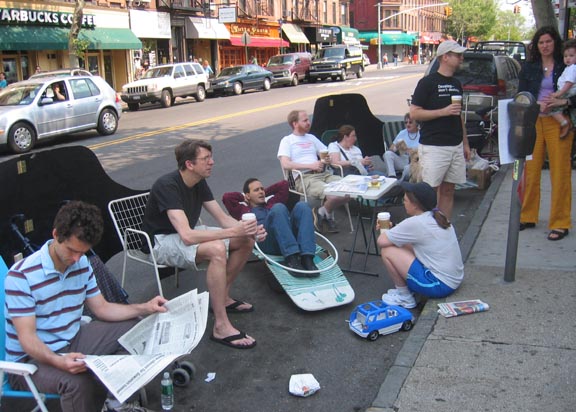 New York City regulations say that metered, curbside parking spaces are only to be used for the storage of vehicles. This kid made sure the rules were being followed. 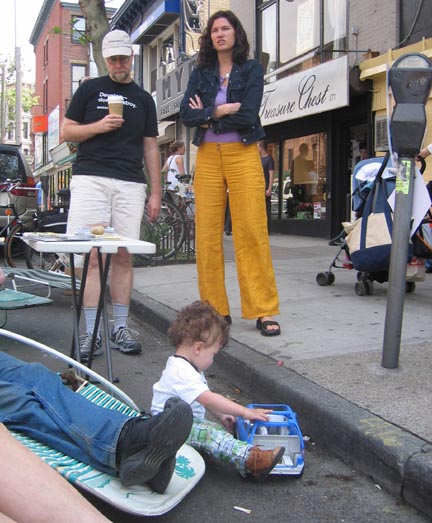 Artists, activists and regular people in cities all over the world are staging similar events to point the irrationality of public space policies that put automobiles and parking ahead of people and communities. Last fall members of Transportation Alternatives staged New York City’s first-ever parking squat in Williamsburg, Brooklyn. That was inspired by an art collective in San Francisco that, literally, transformed a parking space into a park. The San Francisco project also spurred on a group in the Sicilian town of Trapani to transform a strip of curbside asphalt into that city’s first and only public lawn. Recently, artist Michael Rakowitz used a car-shaped tent to create his very own affordable housing program in Vienna, Austria. In July 2003 this group in Oxford, England staged the grand daddy of all parking squats, putting an end to speeding in their neighborhood by installing a fully-furnished living room in the middle of their street. When one pissed-off motorist crashed into some of the furniture, it sparked "Britain’s first documented example of ‘room rage.’" The Open Planning Project’s Clarence Eckerson filmed the Park Slope squat and got some great interviews. If you still think a parking squat sounds a little bit crazy listen to how articulate these people are in explaining what they are doing and why. Consider running a parking squat in your own neighborhood one of these days. 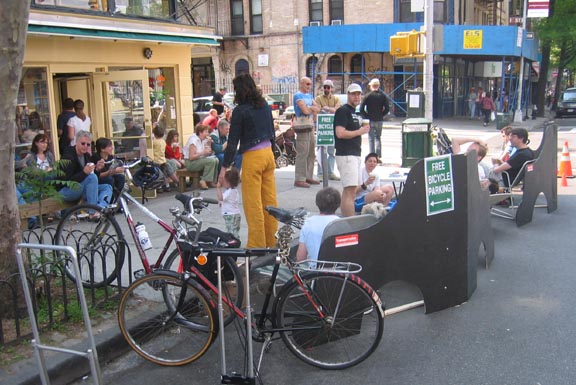